Orange Juice" is the ninth track by Melanie Martinez that will be featured on her upcoming sophomore album, K-12. Very little is known about it. This song and Nurse's Office are the only non-explicit tracks on K-12.

Orange Juice was a Scottish post-punk band founded in the Glasgow suburb of Bearsden as the Nu-Sonics in 1976. Edwyn Collins formed the Nu-Sonics (named after a cheap brand of guitar) with his school-mate Alan Duncan and was subsequently joined by James Kirk and Steven Daly, who left a band called The Machetes. The band became Orange Juice in 1979. They are best known for the hit "Rip It Up", which reached number 8 on the UK Singles Chart in February 1983, the band's only UK Top 40 hit.

The Orange Juice" or sometimes known as "The Third Album" was the band's last full-length album. And one that had only two members at the time of this recording, along with Collins there's the drummer Zeke Manyika. The Third Album" is produced by Dennis Bovell, who was known in the 1980s for his 'dub' production work for bands like The Slits and The Pop Group. His work has always been dub music, but also the more experimental British bands and artists.

Yum!Yum!ORANGE is a J-ska(Japanese Ska) band with lyrics in both English and Japanese naturally. Yum!Yum!ORANGE also features a female vocalist. Enough with the back story of these guys/gal. um!Yum!ORANGE(who will be referred to as YYO! In the future) Let’s delve into this J-ska! The opening track Sunny Sunday opens up the CD with a blast from the horn section, which gives you immediate fun vibes. 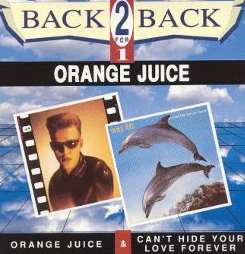