Listen to albums and songs from Olivier Vernet.

Main Performer or Conductor: Olivier Vernet. Instrumentation: Organ. These new CDs (published in 1998) is performed by Olivier VERNET who's the french raising star of the organ. His 15 CDs were fully awarded in France : ffff from "Telerama magazine" (the maximum mark), DIAPASON D'OR (it means it is an flabbergasting peformance) from "Diapason magazine", CHOC MUSIQUE from "Le Monde de la Musique".

Olivier Vernet served for 15 years Co-Titular Organist of the Church of St. Louis in Vichey with its famous Bernard Aubertin organ. He was selected, by international competition, as successor to René Saorgin as titular organist at the Cathedral of Monaco, as of January 2006. Olivier Vernet maintains an international career as soloist and concert artist. Olivier Vernet is organ professor at the Tours Conservatory and at the Academy of Music Rainier III of Monaco. He is also artistic director of the Monaco International Organ Festival, and of the Organ Festival of Mougins. always accurate, musical, and satisfying. 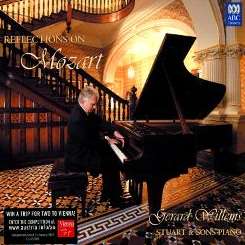