The popular faith-based anthology series returns with WOW Gospel 2017. Collecting 30 of the biggest gospel hits of the past year, WOW Gospel 2017 brings together a dynamic cross-section of contemporary and traditional gospel artists. Here we get songs by such luminaries as Fred Hammond, VaShawn Mitchell, Hezekiah Walker, and others. Included are songs like Donnie McClurkin's "Stand," Tasha Cobbs' "Put a Praise on It," Kirk Franklin's "Wanna Be Happy?," and many more.

Listen to WOW Gospel 2016 in full in the this site app. Play on this site. 2016 RCA Records, a division of Sony Music Entertainment. You look like someone who appreciates good music.

WOW Gospel 2017 is the premiere annual collection of top selling artists from Traditional to Contemporary Gospel! This power packed compilation returns with the best Gospel praise anthems, ballads and radio hits of the year. 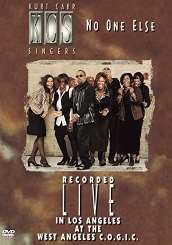 Kurt Carr - No One Else [Video] album mp3