Taken from Malice's album - In The Beginning. Enjoy! - I do not own the rights to the music or the artwork

Features Song Lyrics for Malice's In The Beginning.

The Beginning by Malice, released 22 March 2017 1. The Beginning 2. BadThings Inc. 3. McHeaven Cafe 4. Argon Oxygen 5. Snow 6. Town of Shining Light 7. Malice/Frederick - Snow (Reprise) 8. The Beginning (Reprise) 9. The Journey Ahead 10. Death Note (Bonus Track) 11. The Path (Bonus Track) That's a first album, so I have to write something here. The first thing I should do is saying 'thanks' to the people below: Johnny Massacre: thank you for the support and advices you gave me - without you this album wouldn't exist. Evgeniy Malkovetz (.

Unfortunately for Malice, '85 was when the market of catchy Heavy Metal was beginning to die out,. NWOBHM was dead, and in turn most bands from there were trying to cash in on the American pop market (with catchy Heavy Metal of course), all the while large scenes were emerging of vastly different Metal styles, and in the end this genre basically saturated itself unto suicide. This album covers that entire spectrum, ranging from horribly silly to absolutely amazing. That makes it, in more ways than one, similar to Judas Priest "Defenders of the Faith".

Malice - In the Beginning. 10 songs lyrics: Rockin' With You, Into The Ground, Air Attack, Stellar Masters, Tarot Dealer, Squeeze It Dry, Hellrider, No Haven For The Raven, The Unwanted, Godz Of Thunder.

By this point Judas Priest were a bit played out, however, so if the real thing didn't seem all that appealing, neither did this sound-alike band at the time. Thus the band's also-ran legacy today

Malice is an American heavy metal band formed in 1981, best known for their appearance on the first Metal Massacre compilation and a pair of albums on Atlantic Records. Their heavily European influenced style elicited instant comparisons to Judas Priest due to vocalist James Neal sounding uncannily like Rob Halford in addition to fielding a guitar duo in the Tipton/Downing mode, with Malice's Jay Reynolds looking like a dead ringer for . It consisted of songs the band had cut with Wagener and material recorded with Ashley Howe producing. Malice teamed up with producer Max Norman for their sophomore album, License to Kill, released in 1987.

Albums related to Malice - In the Beginning...: 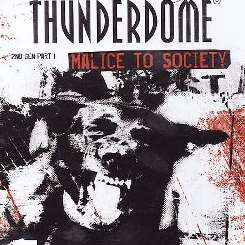