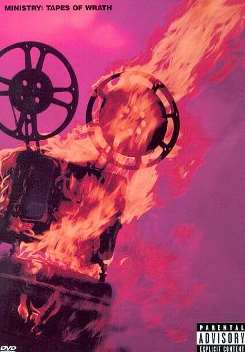 Tapes of Wrath taps into the rise and demise of this innovative and aggressive Chicago horde: from early aggro ("Over the Shoulder," "Flashback") to the top of the slag heap ("Burning Inside," "Jesus Built My Hotrod") into eclectic obscurity ("Lay Lady Lay," "Bad Blood").

Ministry: Tapes of Wrath". Rock Hard (in German). Retrieved March 15, 2018. Tapes of Wrath on IMDb. Cover Up is an album of cover songs by Ministry (titled: Ministry and Co-Conspirators) released on April 1, 2008. The album includes previously released covers "Roadhouse Blues", "Lay Lady Lay" and "Supernaut". Cover Up was intended to be Ministry's final release before their three-year break up from 2008 to 2011. On December 3, 2008, "Under My Thumb" was nominated for a Grammy Award in the category of Best Metal Performance in 2009. It contains various tracks recorded on their 1996 world tour in support of the album Filth Pig. The album title is a play on the word sphincter.

Tapes of Wrath features 10 Ministry music videos - most of them too controversial for MTV. Even hardcore fans have rarely seen many of them. Selections Include: Over The Shoulder Stigmata Flashback Burning Inside The Land Of Rape And Honey Jesus Built My Hotrod . Rodrigo Gel - We Are the Ministry album mp3